Please note: I’m busy moving blogs, and copied this content over. The image links are going to break, if they haven’t already. It is what it is. 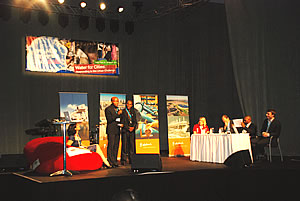 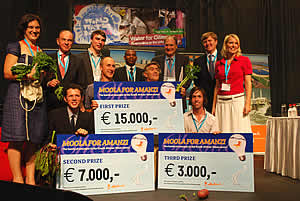 The report below is adapted from the WaterNetwork website. Merah Mas founder, Bernelle Verster was the main organiser of this initiative. The competition, which was part of a bigger initiative – the Dutch-SA water partnership – aimed to generate high quality investment proposals addressing water and sanitation issues and build awareness in the public eye, the water sector and sectors outside conventional water-related industries, so that business can go hand in hand with access to clean and affordable water.

the battle of concepts in the South African Water sector

A competition for innovative solutions in the South African Water sector.

The Moola for Amanzi competition challenged South African students and young professionals to send in their best ideas for the South African water sector. The competition was launched at the Small Wastewater Treatment conference held in East London in November 2010, coinciding with the launch of the Waternetwork webportal (www.waternetwork.co.za). Eighteen promising proposals were sent in before the deadline was reached on February 1st 2011. The Embassy of the Kingdom of the Netherlands and a group of both Dutch and South African water experts selected the top 5 best proposals. These selected teams were invited to pitch their proposal and present their innovative and creative ideas at the World Water Week in Cape Town. There they presented on the main stage in front of a professional jury and in front of all UN delegates, NWP and WISA members, with special guests of honor His Royal Highness Willem Alexander Prince of Orange and the Deputy Minister of Department of Water Affairs.

The day before the final, 20 March, all finalists were invited by Royal Haskoning to participate in a training, which gave them tools to set up their business and improve their project management and presentation skills. The training took place in the CTICC. Berte Simons, Director Advisory Group Royal Haskoning enthusiastically provided the extensive and very useful training to the teams, even spending close to a full day with the finalists preparing them for the next day’s final.

Monday 21 March the Moola for Amanzi final kicked off at the main stage of the UN exhibition. The visitors of the UN World Water Day and local and international press shows impressive interest in the finals. This increased the pressure, as the teams had to present to a larger audience than anticipated. Special guests in the audience, His Royal Highness Willem Alexander Prince of Orange and the Deputy Minister of Department of Water Affairs made this event even more important. The final was presented by Bernelle Verster of the Young Water Professionals and proudly presented as Water Maverick. She assisted with organizing the Moola for Amanzi competition from the start which has definitely contributed to a successfully event. The jury of independent experts consisted of; Professor George Ekama of UCT, Doug Sanyahumbi of the Technology and Innovation Agency, Dirk Janssen the UN Youth Representative for the Netherlands and Fransje van der Marel of McKinsey.

For the jury it was difficult to choose the best and most innovative idea. After a short break where the audience enjoyed sponsored drinks by Heineken at the NWP-WISA stand, the jury came with a decision. The Ambassador of the Kingdom of the Netherlands handed out the prices to the 3 winning teams. After the award ceremony there was a photo opportunity together with His Royal Highness the Prince of Orange, the Ambassador and the winning teams. The Prince of Orange also spoke to the 3 teams and shared his enthusiasm about their ideas.

The third place, a price of 3000 Euro was won by Modern Community Solutions. Their plan is based on the idea of re-using urine as fertilizers and the company intends to buy the urine from people from informal settlements.

The second place, a price of 7000 Euro was won by Food & Trees for Africa. This is an existing organization that has already successful projects. They aim to re-use urine from urine diversion toilets and will use it to maintain the local vegetable gardens in poor communities and at rural schools.

The first place, a price of 15.000 Euro was won by People’s Power Africa; this is an existing small company that is focused on a green hub for re-use of processed waste and integrated biogas sanitation system for rural schools.

Water Genomics laboratory and Water Polymers-SA were the other two winning concepts.

The winning teams were encouraged to frequently report about their progress in the coming year to the Embassy of the Kingdom of the Netherlands in Pretoria. They also presented their progress at the Young Water Professional conference, July 2011 and at WISA 2012 they presented their final results which have been achieved with the investment of the prize money.

All teams have been linked to a Dutch Water organization that will advise them on their future steps. There are already two organizations that have showed great interest in extending their partnership in working together with the teams in the future.

The Moola for Amanzi competition generated a lot of media attention. Not only South African newspapers wrote about it, it even made the 7 o’clock news at SABC news.

Want to know more about the Moola for Amanzi competition?

“Moola for Amanzi” is a business concept competition that helps kick-start Small and Medium sized Entrepreneurs in the water and sanitation sector in South Africa.

Moola for Amanzi aims to uncover business plans that bring effective and efficient solutions to water & sanitation issues in South Africa. The Challenge is open to South African SMEs or students with a high growth and/or innovative business plan that combines job creation and profits in the business of drinking water, irrigation, (waste-) water treatment, and sanitation.

One aim is to ensure high quality investment proposals addressing water and sanitation issues in South Africa in collaboration with Dutch organizations. Another benefit of this initiative is awareness creation in the sector, the business community and the general public that business and ‘access to clean and affordable water’ can go hand in hand.

Moola in the news: